Direct Hit!’s Crown of Nothing: Bullseye or Miss? 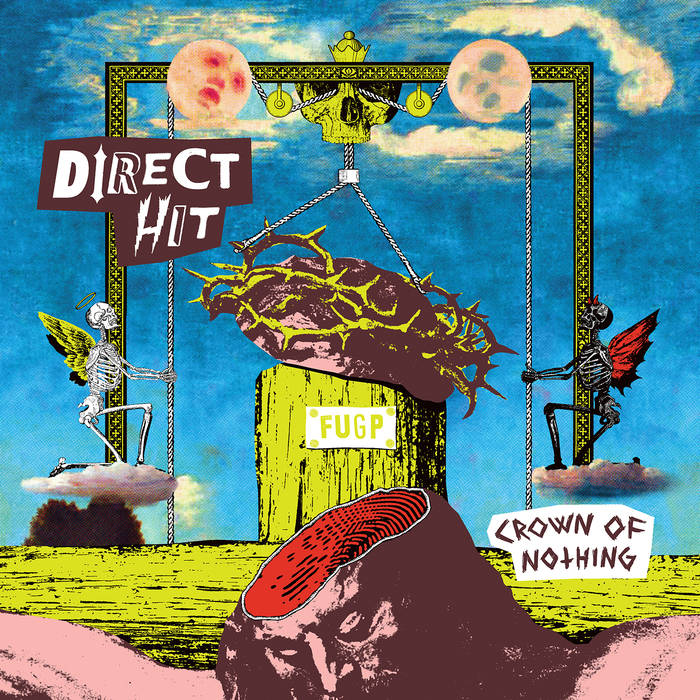 If you would have asked me about “Direct Hit!” at this time last year, I would have had no idea what or who you were talking about. Nearly a year after seeing them open for Less Than Jake and Four Year Strong, they stand out to me as not only a rising name in the underground punk scene, but so much more.
On their newest album, “Crown of Nothing,” “Direct Hit!” hits the ground running to make sure you remember their name. On the first track, “Different Universe,” vocalist Nick Woods sends heavy introspective vibes while belting “Wrong place, wrong time again. Wrong way on home to the dead,” before the rest of the band kicks in over even more reflective lyrics, “Soft skin from liquid coats consciousness, rotting minds in the afterlife.”
While the first two tracks of the album are more “tame” in terms of Direct Hit!’s discography, fans won’t be disappointed when hearing third track, “Pain/Boredom,” which is just shy of a one-minute run-time. “Pain/Boredom,” is a very heavy, deep scream vocal-fused track, and showcases one of my favorite sides of Direct Hit!’s multi-faceted sound.
On track “Something We Won’t Talk About,” the band samples a personal favorite scene from the popular 2000 film “American Psycho.” The scene portrays serial killer Patrick Bateman (played by Christian Bale) talking to his soon-to-be victim Paul Allen about popular 1980’s band “Huey Lewis and The News” and how their popular song “Hip to Be Square,” is about conformity and the “importance of friends,” as well as “being a statement about the band itself.” I firmly believe that Direct Hit! placed this segment in the beginning of the song as a statement about themselves; that they would rather continue to try new sounds and experiment with what they have than to conform and stay complacent.
As I stated above, Direct Hit! has a multi-faceted and even “ever-evolving” sound. On Crown of Nothing, Direct Hit! has a laundry list of sounds to accomplish; from screams and heavy breakdowns that would put a deathcore band to shame, soaring pop-punk choruses, and heavy introspective and self-reflective verses. While it may not be a perfect album by any means, this is Direct Hit!’s closest shot yet to a bullseye.

Songs To Listen To: Different Universe, Welcome To Heaven, Pain/Boredom, Altered States, Something We Won’t Talk About

Rating: 8.75/10
Pros: Amazing multi-layered sound – Exactly the kind of experimentation and maturity you would expect from a Direct Hit! record. Songs that continued to stick in my head for hours.

Cons: A few “filler songs” that failed to grab my attention for more than a few minutes.