FROM THE ARCHIVES: Peace And The Panic Tour Part 2


Neck Deep brought the Between Peace And Panic tour Part II to Buffalo and brought a few up and coming pop punk bands while also bringing along one of the more established pop punk band as well making the show an all around amazing showcase of the pop punk scene. The concert was actually up against two other concerts along with a play all in the same area, however still packed the Townball Room for this amazing show. This show also had a theme of all the bands being non-American bands which will be shown throughout the show as Neck Deep is also from the United Kingdom. Neck Deep is no stranger to having to struggle with exposure and it is amazing that they can bring along these amazing bands to expose them to the United States. The Pop Punk scene across the pond is a very deep and well talented one, so I totally recommend to go to shows such as these ones where you can expose yourself to the talent they have to offer. 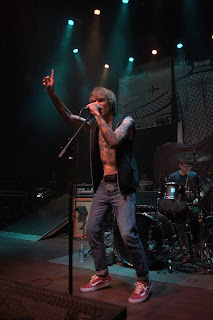 WSTR was the first band to play and was an amazing way to open the show. WSTR had an intensity and energy about them that you need in a good opener. WSTR is from Liverpool, so its probably no surprise they have a similar sound as Neck Deep. They really tore down the house and even got myself to be a fan. WSTR is a band that I actually was not as familiar as I was with the rest and they definitely are worth your time to check out. They have a very America influenced sound and I think they might be a good band to start with if you are just getting into the UK Pop Punk scene and aren’t familiar with many bands.
(Pictured to the left, lead singer of WSTR)

The next band out is a band that I have been absolutely dying to see and they definitely lived up to everything I expected them too. I can honestly say that Stand Atlantic can keep up the energy you get from listening to them from their albums. Stand Atlantic is from Australia, however you probably couldn’t recognize from their vocals. Bonnie Fraser blew everybody away with her powerful vocals and really was the take away from the performance. Even though there set was shorter than the rest because of only having a handful of songs, Stand Atlantic is a band on the rise and is definitely worth the listen too. If you have never heard of them before they actually have a new album coming out soon however start with their song “Coffee At Midnight” which is the song that got me hooked.
(Pictured to the left, Bonnie from Stand Atlantic) 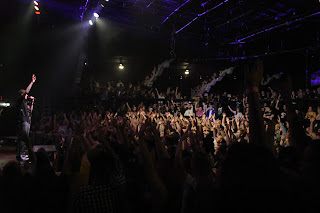 (Pictured Above, Trophy Eyes and the crowd)
The next band returns to the theme of bands from Australia as Trophy Eyes hit the stage from Newcastle. Trophy Eyes is fresh off their heels from their new album which is different from what they have released in the pass. By this time in the show the crowd was electric, and it seems like they were into everything that had to give on the stage. The le
ad singer actually would try to interact or acknowledge the crowd surfers which was a cool touch to the stage presence he brings. At some points during the set it felt like I wasn’t just there to cover the concert its like the sucked me into that atmosphere which is an experience I have never felt. Seriously check them out if you haven’t already and they have a show back in Buffalo at the beginning of December.

Last but not least, the headliner, Neck Deep. Wow. I’ve been to a lot of concerts but there really hasn’t been anything I could even compare Neck Deep too. The Townball Room was more than electric after Trophy Eyes. The moshpits were huge and then the amount of crowd surfing was unlike any other show before it. They stage design alone was amazing, they had their logo on a highway billboard where the lights would illuminate it. Neck Deep played songs from across their entire discography along with their new
cover of Torn, which that song has NEVER sounded better. They also lowered the disco ball from the ceiling during “In Bloom” which I’ve actually never seen lowered in all my shows I have been to at the Townball Room. Neck Deep is one of the top acts in Pop Punk and for good reason. If you haven’t heard of them or just know of them, definitely go out and listen to them!


(All Pictures by Daniel Nelligan)
Posted by Punkstrblog at 11:45 AM