The Struts Strut Their Stuff In Sophomore Album 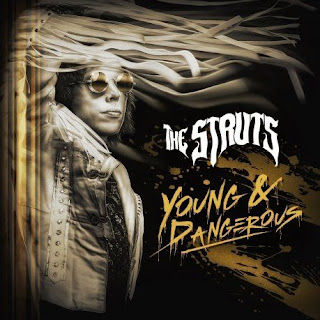 The Struts, an English rock band from Derbyshire came onto the scene a few years ago with their debut album Everybody Wants. Catchy songs like “Kiss This” and “Could Have Been Me” stood out on the radio and vocalist Luke Spiller sounded like no one else currently in the alternative scene. Their music is new but very much taken over by older rock influences. With the voice, guitar, and beats put together, The Struts succeed at being a modern classic rock band and alternative artists at the same time.
YOUNG&DANGEROUS, released October 19th, stays true to the previous album’s style, however, there is a clear increase in experimentation and progression of the band’s sound. With the first track being “Body Talks,” the album takes off with a bang. Spiller belts about not needing to hear what his partner wants because they give it away with their body language (don’t worry-I’m sure consent was still given). It’s catchy, and it is easily the anthem of the album. The record continues with more buoyant songs like “Primadonna Like Me” (which isn’t quite as good as its predecessor), “In Love with a Camera” (one of my favorites), and “Bulletproof Baby,” which sounds a little more contemporary with a hip-hop base at the beginning and throughout.
“Who Am I?” follows up, with a disco influence and a funky beat. Compared to the other tracks, it falls a little flat and fails to make an impression. “People,” stood out to me more than any song on the album. It’s a ballad that’s irresistible to want to sing out at the top of your lungs. It contains more meaningful lyrics than most of the other songs, and the long notes and melody come together to create something memorable and powerful.
“Fire-Part 1” is another impactful song that left me wanting to sing along. “Somebody New” breaks things down and gets personal when it comes to someone wonderful coming along too soon after the end of a serious relationship. As one of the few songs on the album that feels like a real situation, emotions are prominent in it.
“Tatler Magazine” gives off Queen vibes with piano, harmonies, the use of different voices, and a strong sing-a-long beat. “I Do It So Well” didn’t impress me at all and actually feels like a disappointment compared to the rest of the tracks. It seems as if The Struts were going for something they just weren’t able to pull off. “Freak Like You” is okay, and “Ashes-Part 2” is decent and unexpected as it goes both fast and slow throughout
At the end of the album, listeners are in for a special treat. YOUNG&DANGEROUS tops things off with a remix of “Body Talks” that features Kesha. While it really isn’t that different from the original, transforming it into a duet with someone with such talented vocals made it so much better. Kesha’s high, scratchy growls and rock vibe fit the song perfectly, and she and Luke Spiller left me feeling empowered, and continue to do so with each listen. It’s the perfect ending to a record packed with confidence.
It’s a good album overall, and The Struts are sure to stick around and gain success for quite a while. I’m sure I’ll still be listening to a few songs from YOUNG&DANGEROUS until I’m old and harmless.