Trophy Eyes brought their headlining tour, "The American Vacation Tour," to Buffalo to one of the newest and coolest venues in Buffalo, The Rec Room. The tour could have been named "The Totally Stacked Tour" or "The Best Tour Ever" or something along those lines and it would live up to the hype. Top to bottom this has to be one of the best tours in Pop Punk today and before I even get into the bulk of this review, if any of these bands are in your area or this tour is in your area PLEASE go seem them. Up to this point on the tour leading up to Buffalo, they had sold out their previous couple of shows and there was a low ticket warning put out on Trophy Eyes' twitter so I am not sure at the moment of writing this review if they sold out or now. 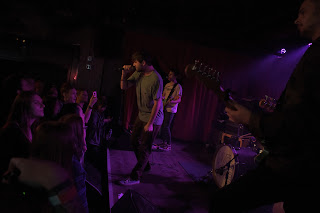 The first band to start this amazing evening off of music is a band called Hot Mulligan. This was the only band on the lineup I honestly had no idea who they were and they certainly made me a fan right away. If you had the chance to hear some of their songs such as Dary, which is one of their bigger hits, you'd find that they are a very energetic band lead by amazing and powerful vocals. We were unfortunately stuck in line during this set so I couldn't say much more other than that the few songs that I did catch of this set was a great way to open the show.

Can't Swim took the stage next and this was one of the bands that Amber Bliss and myself were absolutely dying to see. Can't Swim delivered an amazing set that had the crowd bouncing the entire time. They completely lived up to everything we wanted them too be with some of the best drumming and bass lines in pop punk today. Their drummer, who was  sporting a rad Oasis shirt, which made me fall more in love with the band, and Greg McDevitt, their bass player, are really the backbone of what makes Can't Swim unique on top of their powerful vocals. They played "My Queen" and "Stranger" among their set list which are my favorite songs. I recommend you stop reading this review and go listen to them and come back if you have never heard of them. They were that good.

Microwave followed, and the good times kept rolling. Microwave was a great band to put in the middle because they are not as energetic as the other bands on the bill.  Not to say they weren't energetic at all, they packed a lot of punch however this was the band that gave you sometime to relax a little bit. The band was lead by great vocals and is one of the reason I was excited to finally see these guys place. Microwave is on the lighter side of pop punk and their song "Dull" is a great starting point to understand what these guys are about along with "Stovall" which both were played during the set. 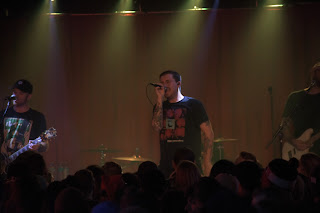 The legendary Seaway was next and if you could harness the energy in the room, you could probably power all of Buffalo and surrounding areas. It was electric and it was due to two factors. Seaway brought their A game and the Buffalo Sabres game was on, which actually played a roll in the show. Seaway is actually from Toronto and literally down the street at the Key Bank Center, the Sabres were playing the Maple Leafs. Every time during the set the Sabres scored you could hear everybody cheering and Seaway was playing along with it, right when Buffalo scored one of their goals, the lead singer sang during one of the instrumental parts "Fuck" but it fit well. If anybody wanted to know, Seaway's team won. Along with that, the entire set was great, the crowd was singing at the top of their lungs and had a circle pit going. They played such great songs as "Lula On The Beach" and "Blur." 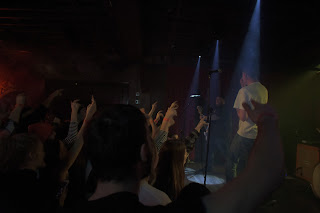 Finally the band that the tour was based around, Trophy Eyes, hit the stage and they were even better than the last time I saw them. They started their set off with "You Can Count On Me" and I bet their lead singer John Floreani could have not sang the entire song and the crowd would have done the entire song by their selves. Trophy Eyes played to the small but electric Tuesday night crowd all their hits and some deeper cuts. The entire set was perfect complete with John's dance moves. Trophy Eyes has amazing songs but you need the live show to really feel the music completely along and to see how passionate not only Trophy Eyes is, but all these bands are about their music. It is really what made this concert beautiful and perfect in every way is the super passionate bands, playing to the super passionate crowd, and it being in such an intimate setting as pop punk is supposed to be played.