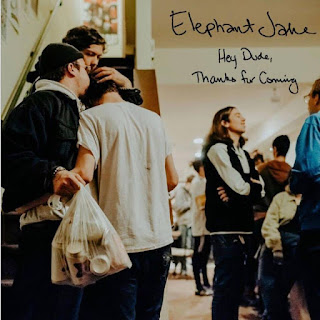 If you are fans of Modern Baseball or The Front Bottoms, Elephant Jake is the band for you. Elephant Jake is an indie-punk band from Orange County New York and formed in 2014. There recent album "Hey Dude Thanks For Coming" is their third album out in their already amazing discography. The album features their sound that like I said earlier if you are a fan of bands like Modern Baseball or The Front Bottoms this band is for you. They feature a very laid back and relaxed sound that makes every album they have written so far a great album to put on and sing along to while driving, which that lately, Elephant Jake has been my go to driving music.

Songs I would recommend of this album have to be "Filling The Void With Jerry Seinfeld" followed by "Andy Finally Lost The War With Disco Beats." However I recommend giving this album a listen all the way through multiple times due to how great of an album it really is.