Panic! At The Disco Takes Over Albany's Times Union Center 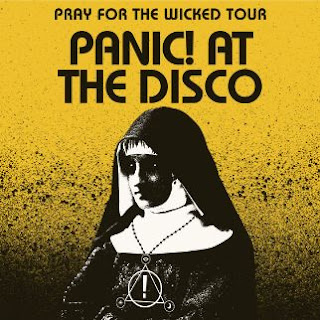 On January 15th, I got to attend the Panic! At The Disco concert at the Times Union Center in Albany, NY. They were supported by Betty Who and Two Feet, who both played small sets leading up to a near hour and a half set from Panic! At The Disco.
First up was Betty Who, a British pop act who spend her small set dancing with to male models while singing some songs that did not really fit the vibes of the rest of the show. Two Feet were up next, and they spent their set playing a bunch of songs that were very heavy in bass which made my seats shake for the entirety of their set. The energy was not there until they played “It Feels Like I’m Drowning”, their one huge hit, and then they got the crowd hyped up and into their set. It was too little too late though and most of the crowd wanted to hear Panic at this point.
Brendon Urie showed off his theatrics right from the start by jumping up from a hole in the stage and launching nearly 5 feet into the air. They opened up their set playing “Fuck A (Silver Lining)” which lead to the greatest moment of my show, hearing a 5-year-old girl sitting next to me scream the lyrics “Fuck a silver lining. As the show went on, they inserted different ideas into the stage show to make things crazy, like during “Crazy=Genius” flames came out of the bottom of the stage and moved along to the song or a piano coming up from under the stage, so Brendon could play “Nine in the Afternoon.”
They closed the first half of their set playing “This is Gospel” and at the end of the song Brendon returned to the bottom of the stage and an extended outro played as they set more stuff up. The next song, “Death of a Bachelor” started with Brendon walking through the floor section of the arena, hugging fans and signing autographs while still singing the song perfectly. The song finished as he approached the sound programming area in the back of the floor section where he got on a piano and played a cover of Bonnie Raitt’s “I Can’t Make You Love Me.” The piano rose up into the air on a platform and in one of the craziest moments of the show, the platform moved through the air as he played and then got up and looked over the edges singing down to the fans 15 feet in the air. Brendon rode the piano all the way from the back of the floor to the stage then he played another cover, this time their cover of “The Greatest Show” from the 2017 movie “The Greatest Showman.”
When playing “Girls/Girls/Boys” the crowd was given colored hearts to put over our flashlights on our phones which when looked at from the front made a pride flag through the entire crowd. Brendon was also given a bunch of pride flags during the song. Nearly at the end of the show, Brendon talked about how much he looked up to Freddie Mercury and how he thinks Queen is the best band of all time and “Bohemian Rhapsody” was the greatest song ever written. This led to one of the best covers of “Bohemian Rhapsody” I have ever heard, and Brendon Urie had all the stage presence and skills to do an excellent Freddie Mercury impression. The main set closed with “Emperor’s New Clothes” and they left the stage for about 5 minutes to set up for the encore.
During the encore, “I Write Sins Not Tragedies” was played to the excitement of the crowd, then they closed the show with “Victorious.”
In my opinion, this was one of the best shows I have ever seen, both musically and as a stage show. Brendon showed why Panic! At The Disco is still riding strong in 2019.