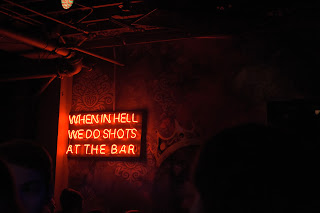 While I was indie/alternative programming director for WSBU for a semester, I got really into watching the alternative music chart on Billboard and seeing what songs were just getting big and what songs were slowly moving up the chart so I could put them on our station before they got huge. One of the songs I credit myself for putting on the station before many alternative stations beat it into the ground was “No Roots” by Alice Merton. I would like to continue doing my chart watching, but now by reviewing the songs that are on the charts and looking at things from a more critical perspective.

This week’s chart opens with “High Hopes” by Panic! At The Disco remaining at #1 for the tenth straight week. This is their biggest single to date, even surpassing “I Write Sins Not Tragedies” in chart position, and recently surpassing it in Spotify listens to become their most popular song ever. Does the song deserve it though? It has a catchy hook and all the elements to be a hit, and it has earned this spot with strong streaming and strong radio play from the alternative and rock stations, and the pop stations as well. I don’t know if I would say it is a better song than “I Write Sins” but it is enjoyable and seeing them play it live this week made me enjoy it more, which was something I needed because I have heard it on the radio every hour for the last 6 months. I don’t see anything knocking this song off the top anytime soon.

Following that is “My Blood” by Twenty One Pilots, off their newest album Trench. This one is a more interesting spot because it is sitting up at #2 on radio play alone. The song has not even a quarter of the plays that “High Hopes” has for streaming and not nearly enough radio play to keep it at #2 for long. You can expect it to be challenged by the #3 song this week after moving up from #4 last week, “Guiding Light” by Mumford and Sons. This song has all the making of being a hit with great vocals, a great melody and a more traditional alternative sound that appeals more to the traditional stations and the modern rock stations more than the two songs above it do. I expect to see it challenge Twenty One Pilots in the upcoming weeks.

Falling back a spot to #4 is “Happier” by Marshmallow featuring Bastille, or more specifically Dan Smith of Bastille. This is another song that seems more fitting to be on the pop charts than it does on the alternative charts, and if it was anyone other than Dan Smith singing in the song it wouldn’t even be here. That’s not saying it’s a bad song, because it definitely isn’t and the first time I heard it I was instantly hooked. However, upon the tenth and hundredth and probably thousandth listen at this point I have gotten sick of it, and since it lacks the depth of another song I should be sick of at this point, “High Hopes”, it only made it easier to get annoyed with. Spotify considers it a Bastille song and streaming numbers put it slightly behind “Pompeii” as their second biggest song ever, and other streaming services show the same stats. This song got to #1 with play from both alternative stations and mainstream pop stations, and now that it is sliding on the bigger pop stations, it is sliding down on the alternative charts as well.

Coming in at #5 is “You’re Somebody Else” by flora cash. This song has been on the chart for over 6 months and is only just now starting to gain a lot of traction. The traction is coming from radio play picking up big on it in the last month or so which is making up for it’s mediocre streaming numbers. Personally, I have a bone to pick with this song and band because I saw them live when they opened for Sir Sly and Joywave, and they ran out of time right before playing this song. The song is okay and I think #5 is as far as it will go.

The backend of the top 10 has “Natural” by Imagine Dragons at number #6 which sounds like every single they have put out in the last 2 years. “Broken” by lovelytheband is sitting at #7 after recently completing a year on the chart. Mainstream pop radio had picked up on that song, but it recently fell off there so it is only a matter of time before it falls off here as well. Billie Eilish’s “You Should See Me In A Crown” sits at #8 this week awaiting it’s turn to get mainstream pop play that would be able to rocket it up into the top 5. “Pressure” by Muse sits at #9 and rounding out the top 10 is “Can’t Knock The Hustle” by Weezer.

Looking down the charts both “Love It If We Made It” by The 1975 and “Superposition” by Young The Giant have moved up to right outside the top 10, sliding the much more annoying lovelytheband song on the chart “These Are My Friends” down to #13. “Worst Nights” by Foster The People and “99” by Barnes Courtney swapped positions at #14 and #15 respectively and one of my favorite songs right now, “Fast Talk” by Houses continued to move up the chart to #16. You have to look down to “Trampoline” by SHEAD to see another gain as it moves up 1 spot to #21 bumping “Make It Up As I Go” by Mike Shinoda featuring K.Flay down a spot. In the back end of the top 30 “Salvation” by The Strumbellas and “S.O.S” by The Glorious Sons both moved up 2 spots taking “April In Houston” by SWMRS and the obnoxious “You’re The One” by Gretta Van Fleet down 2 spots.

“Now That You’re Gone” by The Raconteurs jumped 7 spots in its second week on the chart up to #32. I can easily see this song getting into the top 20 very soon. The jump had some casualties though, knocking “Good Morning” by Max Frost, “Thru These Tears” by LANY, “First Person On Earth” by Robert Delong and “Wicked Heart” by Sublime with Rome down. “Wicked Heart” fell 4 spots to #39 putting it in danger of exiting the chart in the next week. “Funny Business” by Alice Merton rounded out the gainers for the week.
“Blur” by MO featuring Foster The People fell out of the chart last week and returned this week up to #38. This is easily her best song to date, and I would like to see it continue moving up the chart. This also continues the trend of songs by single artists featuring an entire group, look back up the chart to “Every Step That I Take” by Tom Morello featuring Portugal. The Man and “Home” by morgxn featuring WALK THE MOON for reference. The version of this that is on the chart is an alternate version, as the original “Blur” was just with her and didn’t pack the same punch that the version with Foster The People does.

There were only two new entries on the chart this week. “Over My Head” by Judah and the Lion at #36, which just read the review that Daniel Nelligan did on this site of the song to see his reaction and just assume that my reaction is the same. The other new song is “Longshot” by Catfish and the Bottlemen. I have not had the time to form a complex opinion of this song yet, but on the first couple listens the hook is very catchy and it’s a nice blend of the classic rock/alternative sound with a modern twist to it. I don’t expect to see it move any further than #30 and I would not be shocked if it falls out of the chart by next week.