Welcome back to another edition of the WNY Concert Guide here on Punkstr. This is a monthly series where I give you, my lovely readers, information about the can't miss shows of each month. I will be trying to stray away from the big big shows and try to focus on the smaller shows but it doesn't mean a huge show won't make it. So let's get into the list!

You really think I would start by talking about a pop punk show? Tiny Moving Parts is a three piece pop punk band that have created some of my favorite pop punk songs that are on my daily playlist. They are playing Mohawk Place which is Buffalo's most intimate venue which means you will have to be willing to make a few new friends at this show to be comfortable. Tiny Moving Parts themselves is one of the most entertaining band to see live and have so many great songs. This show is a great kick off to your April. 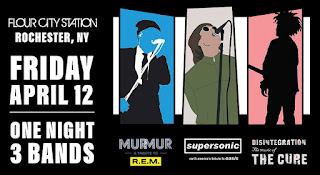 The end of last year I FINALLY got to see the lads in Supersonic, North America's Tribute to Oasis. They do an amazing job recreating the Oasis experience and if you missed them, they are coming back to the area with a show in Rochester. They bring along Murmur (which was also at the Townball Room show) which is an R.E.M. cover band who are another amazing act. They also bring along with them with Disintegration which is an The Cure tribute band. These three bands come together to have such a stacked lineup and a great night of music that I can't wait to be at. This is basically the three bands I listen to growing up the most. 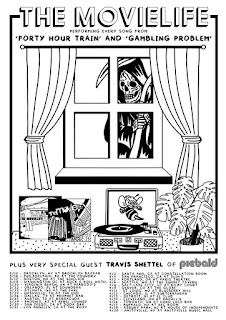 Oh boy, this will be a good one. I was snubbed out of see The Movielife when I was in Brooklyn for the A10 Tournament a few weeks ago. They literally were playing walking distance away from the hotel, however they sold out. The Movielife is an amazing band that you should stop reading this review right now and check out their music. The amount of energy they have is insane and I'm sure that Rec Room will be in shambles by the end. Expect nothing but good out of this show.

One band I will totally tell you I was listening to them before it was cool is Wave Break. They are starting to branch out and come this way and I have never been more excited. alternative music has never been better and Wave Break has an amazing sound. Till I Fall is also a great pop punk band which I am very excited to see! Lets pack the house for these two bands on a Wednesday night shall we?

Posted by Punkstrblog at 9:08 AM