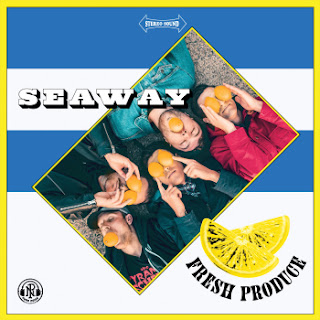 April 19th brought us Seaway's newest offerings with Fresh Produce. Fresh Produce only brings two new singles with it along with other b-side like tracks as this is just alternate versions of past songs from Seaway. As there is nothing too fresh with Fresh Produce this is still a pretty solid album and I know will give me enough until we get a full album of new tracks to sing along too. So how does this album actual sound? Let's dig into Fresh Produce.

The album opens with one of the two new songs by Seaway called "Pleasures." There is nothing I love more than a pop punk song with a great vibe and that can be sung all the way through too. I was literally yelling along in my car this weekend to the line "Meet me on an island / on an island far from here." This is a great way to setup the album, it is a very relaxed sound in my opinion which should be the idea behind an album of this nature.

The album flows on with "Blur" which is the other new song for the album. "Blur" was released prior but this is it's first appearance on an album. Blur is a great song that I've had stuck in my head since it's release. It was a b-side written during their album Vacation.

It continues the relaxed flow with alternate versions of "40 Over," "Lula" and my personal favorite Seaway song "Something Wonderful" which are really different instrumentally than the original songs. These versions blow me away with what Seaway can actually do differently and their range of musical style here has me craving more of this.

Sadly the album has a a lot of spots I would considered "filler" with their covers of "Just What I Needed" and "Closer" among other along with including their 2014 EP All In My Head. " I totally love these songs, but it just leaves a lot to be wanted. Imagine if we could have gotten more alternate versions of some of Seaway's bangers.

I believe this album is super solid but I have to dock it for the huge amount of filler. I know I'll be listening to the new stuff off this album a lot, along with the other fans of Seaway who love the alternate versions and b-sides.

Posted by Punkstrblog at 9:41 PM