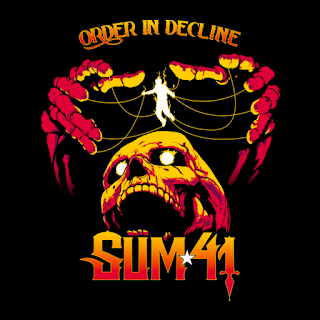 After taking 2017 and 2018 to play festivals and tour in support of 2016’s “13 Voices”, Sum 41 is back with “Out For Blood,” the first single from their upcoming album  “Order In Decline.” While keeping the heavy hard rock and metal/punk infused sound that kept Sum 41 at the top of radio rock in the early and mid-2000’s, Out For Blood seems to take the greatest parts from “Does This Look Infected,” “Chuck,” and “13 Voices,” and wrap them all into one tight track. Lead singer Deryck Whibley’s voice remains instantly recognizable as he belts the chorus, “You can’t stop the bleeding, it’s almost too late. You’re leaving us all behind with hell to pay,” while lead guitarist Dave Brownsound’s chunky riffs and soaring solo really help to drive the track home. In my honest opinion, Sum 41 ages like a fine wine, only continuing to grow in sound and maturity over time; and this is them at their best back with hell to pay and nothing to lose. “Order In Decline,” is out July 19th on Hopeless Records, and “Out For Blood” is available now.

Posted by Punkstrblog at 4:53 PM