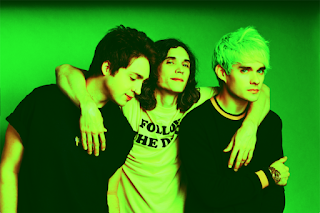 Waterparks is on the rise as they have had two huge things this week. They first announced they signed with Hopeless records (Is there a band I don't listen to from Hopeless Records?) which is simply rad and I hope the best from the two sides come from it.

Also before their appear at Slam Dunk Festival they released Turbulent, their new single has a great mix between their very heavy lyrics with very poppy music which we are used too. However with the addiction of this electronic sound it gives it a very awesome and unique sound. The song hits you like a truck from the beginning to the end making it a great listen. No word on the bad having a new album coming from this but we can only assume anything we hear from Waterparks will still have their same quality sound we always get from this trio.