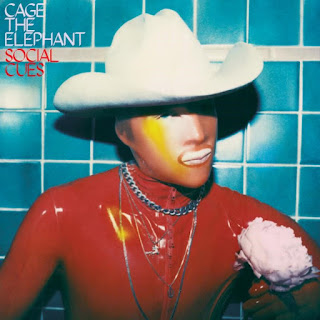 Alternative rock band Cage the Elephant has returned with some devastating things to say on new album Social Cues. Two years after winning a grammy for Unpeeled, the group is back with more personal words and a grungier sound. Social Cues is a lot different from past albums. While going through divorce and death of friends and family, frontman Matt Shultz and other band members wrote this album out of agony and devastation. The lyrics and music are heavier than in previous works. Shultz took his painful life events and found a way to turn them into art. Based on lyrics, Social Cues is arguably their best album yet. Musically, it doesn’t match the same quality of past works and isn’t for everybody. It takes off with upbeat track “Broken Boy.” The fast-paced melody and defiant attitude create something of a punk-like nature. A few other songs on the album have a similar vibe. This is clear in “House of Glass,” a fiery rant about being trapped in isolation. It’s a representation of Shultz’s life and fame, showing how difficult it can be to deal with so much mentally, while still having to “smile for the camera.” It’s a moment, to say the least. In most of these songs, anger and sadness meet grief and a struggle to cope with ongoing misfortunes. At first listen, it’s a bit overwhelming. Listening to this album with a peaceful, happy mindset will not work for an optimum experience. Most of the effect comes from Shultz’s heartbreak and the emotions that come with it. The instrumentals are edgier than they’ve been on other albums and the lyrics are filled with confusion and agony. While songs like “The War Is Over” and “Skin and Bones” are classic Cage the Elephant, Social Cues does not contain anything as magical as “Cigarette Daydreams,” from 2013’s Melaphobia. It doesn’t have any songs like the beautiful past hit “Trouble” (Tell Me I’m Pretty, 2015) either. Perhaps this is because Shultz was in a better place at the time and wrote his music in a way that showed it. The closest song to these pieces is “Goodbye,” a piano ballad written for Shultz’s wife during their divorce. It’s a little difficult to listen to, due to its melancholy message coming straight from his heart, but it is too enchanting to resist. Single “Ready to Let Go” is also very personal, as Shultz tries to figure out how they got to where they are and attempts to accept the loss of their loving relationship. Social Cues is the most real album Cage the Elephant has written so far. It’s more rock than indie, indicating a change in the band after all that’s happened to them. Life is full of grief, and Social Cues is a tremendous reminder of that.
Posted by Punkstrblog at 12:00 PM