The Jonas Brothers Are Back! (Happiness Begins Album Review) 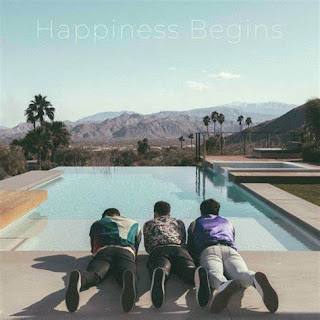 The Jonas Brothers have made their royal return and have dropped their first album in an entire decade (not including 2010’s Jonas L.A. soundtrack). For those who made the argument that they couldn’t really break up because they’re brothers, thank you. But now they’re back for real, with a whole new sound and many more years of life experience under their belts.
The album kicks off with its two singles-“Sucker” being a mushy, upbeat anthem for this summer and “Cool” being a smoother feel-good tune that exudes confidence.
“Only Human” comes next. This song contains reggae influences and a steady beat. The xylophone instrumentals help to create an island paradise atmosphere, even though the message is all about dancing in the living room. Good times can be found in the simplest of places, and the tropical theme really emphasizes that point.
“I Believe” is an even more calming track. It has the ability to transport the listener to another place. It’s a love song that radiates the feelings of the narrator onto them. It’s sort of gorgeous.
“Used to Be” is also mellow, but comes with a stronger drum beat. It sounds similar to other popular modern songs, but because of the harmonies and acoustic guitar, it feels dreamlike and too soft for a mainstream hit.
The next song “Every Single Time” brings with it more of the reggae influence from earlier. Although with this song, it’s almost strong enough to completely cross genres. The lyrics tell a basic tale of struggling to move on after a break up. “Every single time, I keep on coming back to you / You're always on my mind, it doesn't matter what I do.” It’s not revolutionary, but the musical experimentation is a breath of fresh air.
“Don’t Throw it Away” plays afterward, with an electronic style, not unlike that of The 1975 or Bleachers. The lyrics are more meaningful and the story is more interesting than in the previous track. The narrator is being left by his love interest, but insists that what she’s upset about isn’t worth ending the relationship over. Lyrics like “If it's too much to open up, then give it time / I see it in your eyes, so let's sleep on it tonight” are relatable for anyone who’s ever questioned their relationship. The musical style and delicate harmonies of Nick and Joe make this an album stand-out.
“Love Her” is another song about the difficulties of being in a relationship. However, this one is more positive and hopeful. Now that all three brothers are happily married, they understand that fights are going to happen no matter what, but “the hardest parts are always worth it.” While lyrics such as “'Cause when you love her / No matter the fight, you know she's always right” are slightly comical, the following lyrics “And they say love can hurt / But seein' her smile can get you every time” are truly endearing.
“Happy When I’m Sad” gives off major Paramore After Laughter vibes. It’s upbeat, like how “Hard Times” is, and the words admit a sadness that the narrator doesn’t show, like in “Fake Happy.” It’s a catchy song with sad honesty.
“Trust” is bold, with sounds that are different from anything else on the album. “Strangers” goes back to a more pop electronic sound. The instrumentation and melody create something laid-back and mystical.
While “Hesitate” is a beautiful emotional ballad, “Roller Coaster” is a fun, carefree anthem with a smidge of country mixed into the electronics. It’s one of the happiest-sounding songs on the album. The lyrics seem to describe the ups and downs of the band over the years, from their teen years of fame working for Disney, to falling off the grid, to getting back together, to splitting up, and years later, coming back together again. It’s a great song; definitely one for the road trip playlist.
The final song on the album is called “Comeback.” It’s a statement that, through everything, the narrator will always be there for his girl. Perhaps it’s an oath from the boys to their wives, but the title cleverly represents the Jonas Brothers’ comeback and is even spelled the same way. The ending lyrics are sung in a cappella, ending the album on a graceful note (literally). It’s the perfect end to an unexpectedly well-written modern album.
The Jonas Brothers have grown extensively overtime as musicians, and their experience apart has helped them get better. While the band’s music has transformed heavily to match the popular tunes of today, it still manages to differentiate itself. They’re still the tremendously talented band we fell in love with thirteen years ago, just with an all-new creative process.

Posted by Punkstrblog at 8:19 PM