So What? It's Breakup Season. (Single Review) 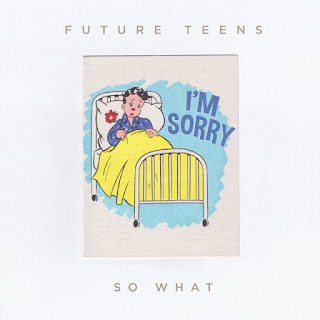 Since recently discovering Future Teens out of Boston I've been in love. Since opening for the Hot Mulligan Headlining tour they have recently announcing opening for Oso Oso and more important a new album Breakup Season. Since I did not get to review the first single from this album, Frequent Crier (which is a banger, go check it out), and their second single, Emotional Bachelor, I thought it was a great time to pick up on the coverage of this new album with their second single So What which was released a few days ago of writing this on August 8th.

So What is a great slow jam which is totally different sound than the previous single. The other difference is that it features the beautiful vocals of Daniel Radin and I think it perfectly fits their "Bummer Pop" genre. The song is all about feeling  about feeling emotionally stunted. Usually I post the spotify link before but instead they have an awesome music video out so check it out down below.

Breakup Season is out 9/6 via Triple Crown Records & Take This To Heart Records.
Posted by Punkstrblog at 2:04 PM