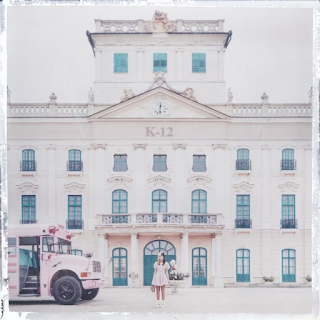 After four long years of Melanie Martinez shushing fans and producers trying to force her into releasing new music, the time has come for Cry Baby’s story to continue with the new album and feature-length film K-12. The character Martinez created in her debut Cry Baby (after the same name) is dealing with significant issues in school that most kids experience, such as bullying, body image, and mental health to name a few. Through the fantastical, eerie movie and 13-song concept album of creepy synth-pop, Martinez has made a brilliant comeback.
The movie K-12, which Martinez starred in, wrote, and directed, is an hour and 32 minutes long and can be watched in its entirety on Youtube for free. Each song is performed with its own musical number. While it’s not necessary to watch the movie, it does add a much more in-depth perspective to the album. With Martinez’s artistic vision laid out in front of our eyes in story format, a new appreciation comes out of this engagement. The narrative isn’t fully cohesive and there isn’t a ton of script, but the set, costumes, and dancing are aesthetically beautiful.
The K-12 album kicks off with “Wheels on the Bus,” which pairs the traditional child rhyme at times with a quaint pop beat. Cry Baby describes a situation in which kids are bullying and being overtly sexual on a school bus, but the driver is saying nothing. The message behind it is one criticizing society for doing little when it comes to sexual abuse and bullying. It also happens to be extremely catchy. An album highlight for sure.
“Class Fight” is another take on bullying, however, from a different perspective. Cry Baby gets in a physical fight with a classmate (both in the movie and song), and chilling lyrics such as “the teacher broke us up after I broke her/And my one true love called me a monster” show that she has the upper hand. Cry Baby lets us know her father encourages aggressive behavior as she sings “Daddy chimed in ‘go for the throat.’” Martinez is likely referring to the gender roles of men needing to be tough and strong, as well as how men are taught to be competitive to a violent degree.
“The Principal” is a treat for sure, especially since it’s supposedly about President Donald Trump. It’s worth a listen based on that fact alone.
“Show & Tell” is a stand-out on the album showcasing Martinez’s ability to take something creepy and make it beautiful. For Cry Baby, it’s about her peers picking on her for her looks and personality. For Martinez, it’s about being forced to do certain things in the music industry, like a marionette (portrayed literally in the movie).
“Nurse’s Office” isn’t quite as good, but it goes along perfectly with the story. Cry Baby escapes the bullies in the nurse’s office. The coughing noises throughout give it an interesting touch.
“Drama Club” is slower and calmer than most of the songs on the album. It’s one of the easier tracks to analyze, with metaphors that are more obvious than others. Bonus points for the Wizard of Oz reference.
“Strawberry Shortcake” is one of the most powerful songs on the album. Martinez’s first line is so direct that it hits with a physical sting: “Feeling unsure of my naked body.”
The frank line hits home with almost every girl listening, and many boys, too. She points out the pressure to be pure instead of explore her sexuality, schools sending girls home for sexist dress codes, and how women are blamed (and even blame themselves) for sexual harassment. It’s so relatable it hurts. Lines like “That’s my bad/No one taught them not to grab” and “People all around me are watching closely/’Cause it’s how I look and not what I think” call attention to some of the most significant issues women still face today.
“Lunchbox Friends” is a lively song that plays around with the sound of Martinez’s voice. It describes the typical “mean girl pretends to befriend the new girl and lets her sit at the popular lunch table” stereotype that occurs in movies such as Mean Girls. Basically, it’s about fake friends. Cry Baby wants nothing to do with it.
Another crucial song on the album is “Orange Juice.” Turning oranges into orange juice is a metaphor for bulimia, as Cry Baby pleads her friend not to continue harming herself. While the song itself is pretty, this one is also praiseworthy for its topic.
“Detention” contains a smooth, sensual sound, making it pleasant to listen to. For Cry Baby, it’s about being trapped by her teachers in, well, detention. For Martinez, it’s about feeling trapped as an artist in the music industry.
“Teacher’s Pet” starts off seemingly encouraging of student/teacher relationships, but Martinez soon clarifies her purpose of showing the victimization of this real-world scenario. She doesn’t romanticize or blame it on teen lust. The student is prey to a sexual predator, and her side is perceived as such.
“High School Sweethearts” is probably the best song on the album with the best musical number in the movie (Martinez can really dance). Its depth is just as emotional as it is melodic and vise versa. Taking a chance on a new relationship is scary, and Martinez encapsulates those feelings perfectly.
“Recess” is the last track on the album. To end it on a positive note, it’s a badass reminder to ignore the haters and always be yourself, unapologetically.
Posted by Punkstrblog at 3:26 PM