I was fortunate enough to attend Marquee Grand's EP release show on January 24th at the sold out Rec Room in Buffalo, New York. According to Marquee Grand this is the first time that Rec Room has sold out for a local show. To be honest you could not have a better lineup than the one on hand, it was no wonder how they sold it out. 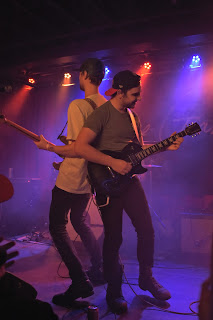 The night kicked off with a rather rad band called Johnny & the Man Kids who put on a great opening performance. They came out with sparklers and light sabers. They also lit incense. This band is self described as lo-fi pop rock and I really dig it. If you like the band Fernway you'll love this type of music. 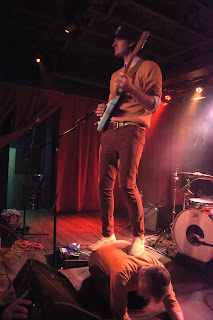 The show continued with one of my favorite live acts of all time The Burkharts who always leave me wondering what I actually just saw along with some great tunes. They are an Alt Rock band but I think their sound is best described like my friend said "imagine if early rock and roll became super dreamy and had a baby with today's Alt Rock scene." They have some great songs but their live show is what blows everybody away. They are something different when you get the opportunity to see them live doing what I would describe as Rock Parkour. The picture above really gives you an idea of the craziness of these shows that the Burkharts put on. 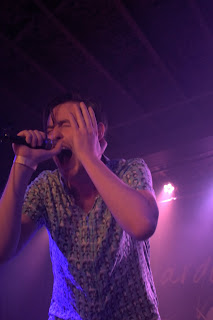 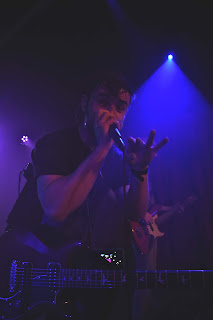 It was finally time for Marquee Grand and they absolutely killed it. They played their songs that everybody knows and you have probably heard on Alt Buffalo if you listen to that station along with their new EP that has some really great songs on it (review coming soon). Their set started with balloons everywhere of the colors of their new EP. Which seemed like a cool idea but turned into a game of kick the balloons into the crowd. The game of keep up in the crowd was great. The band had great energy through their set and had a very big band feel. The future is bright for the boys of Marquee Grand.

Posted by Punkstrblog at 8:46 AM